skip to main | skip to sidebar

Tony Harris may not be a dick, but he plays one on the internet.

After more than a year of not-blogging- I break my long silence with a reaction to the sad nonsense raging over the internets because of a blog.

Open Letter to Mr. Harris:
You’re feeling attacked- and I can understand why you would feel that way. A lot of people lashed out at you because of that post you wrote- but now that I read your update- I suspect you can’t see why it bothered people. You don’t hate women- but you also can’t get your head around why what you said might be offensive. I’m just going to break it down here for you.

"I am so sick and tired of the whole COSPLAY-Chiks. I know a few who are actually pretty cool-and BIG Shocker, love and read Comics.So as in all things, they are the exception to the rule. Heres the statement I wanna make, based on THE RULE:"

The way this reads is that you are talking to “most” female cosplayers. In your update, you say that the only think you would change is that you should have mentioned the fake male fans as well- but you spent most of your original post talking about the Cosplay womens looks and their effect on male REAL Nerds. It seems like you are suggesting that your original complaint could directed at either sex- but that's not really accurate. You're talking about one particular subset of "fake fans," and your anger is directed at "posers" who are there to be preditory.

“...the REAL Nerds.. the ONE thing they all have in common...[is that] They are being preyed on by YOU.”

I assume that you don't think that MOST male cosplayers are there to prey on poor, awkward female fans (or poor, awkward gay male fans). I am also not quite sure what you mean by poser in the first place. If you just started reading comics last year- or maybe you only read them once a year- or maybe you read them as a kid but now you just like the movies-or maybe only your girlfriend reads comics, but you're not really into it- does that mean you shouldn't come to conventions?

I really don’t think you realize that you just said that you think that "MOST cosplay “chiks” are out there 'preying' on REAL NERDS." It also seems to say that you believe that "[MOST Cosplay chiks] secretly think that Real Nerds are REALLY PATHETIC." As you can imagine- that is a lot of women to accuse of having really slimy intentions.

You also seem to think that Most Cosplay chiks are "promising [Real Nerds] the Moon and the Stars of pleasure" by hanging on them or being almost naked. I don’t think you realize this- but you’re calling those women cockteases. It sounds like- whether it’s intentional or not- that you think that it’s particularly bad that these women talk to and pay attention to men but won’t give it up. It also sounds as though you think that if they talk to men and flirt with men, they should be obligated to sleep with at least some of them. I’m sure that’s not really what you meant- but you can see how it might be read that way- especially when you also make a point of talking about how Most Cosplay girls aren’t even Hot. They are just “Con-Hot”- which I assume means that at conventions the Looks Bar is lowered and any woman’s hotness value is inflated due to a gender imbalance. I know you don’t see why that could be seen as incredibly insulting- but look at what you are really getting into. There are tons and tons and tons of women who cosplay. It’s not exactly cheap. You are suggesting that “MOST” of these women spend hundreds of dollars on costumes and then even more money to get into the convention- because they are vapid, attention seeking cockteases- and then you claim that their worst offense is that they don’t even bother to learn the material.

It is incredibly unlikely that Most of the women you see in Costumes just randomly pick comic cons as the place to be flushing money down the drain all willy-nilly just so they can be vapid attention whores who don’t even bother to let the nerds stick it in after all those sexy silent promises.

I’ve been to many-a-comic-con. I’ve met many Cosplayers- and all of them have had at least a cursory knowledge of who they were playing. I also met a few women in costume at shows who had no idea what the hell was going on or why the costume they were wearing had a boob window. Those women were all booth babes- performers who were being paid to be there- and suddenly the comic con is THEIR office, too. - And really? Those Paid Performers? They aren't cosplayers. They don't even know what "Cosplaying is" unless someone told them they were doing it.

You say that the 'real' fans who cosplay shouldn't be offended- this isn't about them- but if it's MOST of the females- then it must be about some of them, right? How can they know they aren't being lumped in when they walk by your table at shows? Isn't it likly that you've mistaken more than a few women who can pass your nerd test if you interviewed them- but since you weren't given the opertunity to check their street cred, you just went ahead and assumed that they were the same as all those other preditory poser attention whore cockteases?

Just sit back and think for one second- is it really likely that more than half of the women in costume who walk by your both are really uninformed, evil succubi intent on eating the souls of the poor virginal Real comic Nerds? I think it’s more likely that you might be feeling empathetic to a lot of dudes that you see who are obviously awkward- and end up projecting a malicious intent on the women. You know logically that there is no way you could know how much they actually know about comics.

Even still- Say you are right about like (very generously) 10% of the women in costume- that they really DONT KNOW SHIT ABOUT COMICS. I don’t really understand why that means they shouldn’t be allowed to dress up and come to conventions. Should we all study at home in secret until we know enough to walk through the hallowed aisles of Artist Alley? I bought my first comic when I was 9- because my brothers and I liked to play Spiderman. I would have done anything to go to a comic book convention when I was ten- and I had NO IDEA about anything comic related- except that Jubilation Lee was only a little older than me and that I wanted to BE HER.

I suspect that you see these women as being “in the way” of what comics should be. I don’t think that’s true. They aren’t there to make trouble or to hurt the industry. Most of them- the real vast majority of these women are just wearing costumes because they love the material, are excited by fun of dressing up, and want to get in on the energy of a convention. Why they make you so mad- why you really believe that they must have a nefarious purpose might be something you want to examine.
Posted by Nikki Cook at 5:19 PM 2 comments: 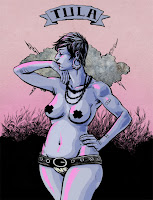 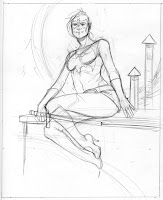 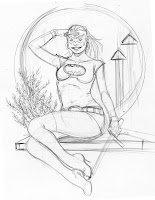 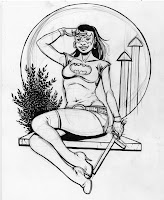 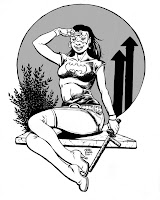 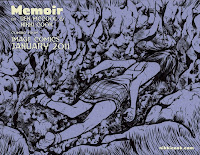 Posted by Nikki Cook at 2:44 PM No comments: 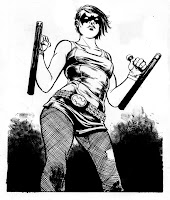 the results are in!
you voted for bat girl, you got her.
Posted by Nikki Cook at 2:40 PM 3 comments:

results of the tweet-draw today

a good scan of what i finished up with!

Today i tweeted as i drew a pretty pretty picture. This is the kind of wild and crazy times you can expect here in the big apple! now i go to get ready for NYCC! 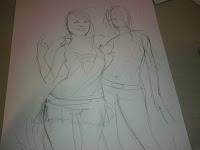 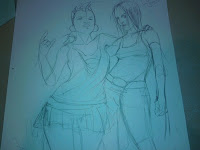 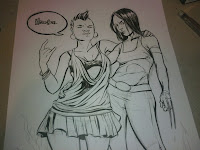 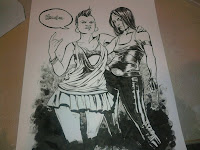 This and a slew of other original art and junk will be avalable from me this weekend at comic con! I'll be at the Comic News Insiders booth on friday from 4-5 and then on sunday from 12-1. See you guys there!

Nikki Cook
Breaking hearts via the sequential arts! Nikki Cook is a cartoonist living in Brooklyn, New York. She has appeared in comics from such publishers as Vertigo, Image, and Boom Studios, and Marvel. She has self-published for years, and was a founding member of Act-I-Vate, the webcomics collective. She is very tall and is descended from Norwegian prize fighters.
feel free to email me at Nikki Danger Cook at gmail dot com